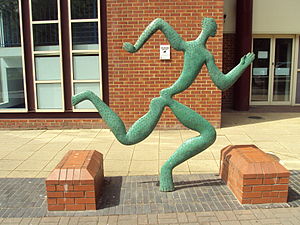 I recently attended a meeting where one of the speakers was Dr. Mark Hyman.  Among other fascinating discussions, he talked about how important it was to create a support team as well as to set up your physical environment for success.  In the case of focusing on your health and eating habits, he talked about one of his successes with the Saddleback church, who with his help, created an entire program and website to promote health–The Daniel Plan.  Here parishioners can join a support team.  Get plan information and education in videos, blogs and more.  It’s a total environment for changing the way they live and getting fit and healthy.

I listened to some of the videos, in particular Dr. Daniel Amen and his wife going though someone’s pantry and refrigerator to eliminate all the “bad” foods–things like hydrogenated oils, high fructose corn syrup, chemicals and additives.  By doing so you not only become proactive in showing your commitment to yourself, you create a physical environment that supports healthy eating habits.

Mark joked about the collaboration between a nice Jewish boy from NY and the Saddleback Ministry.  But it’s no joke that this program is effective and changing lives.  Coming soon, he’ll have a website that will support those not part of the ministry, but you don’t have to wait to get started.

Commit to eating better.  Mark’s book, Ultrametabolism, is a good start, as are so many of the excellent books that have come out in recent years.  Prevention Magazine is another good resource.   There’s a wealth of resources both at the Daniel Plan site and Mark’s own site http://drhyman.com/7-keys-to-ultrawellness/ and http://drhyman.com/healthy-library/.

Commit to moving more.  It would be amazing to have the resources of a personal trainer, but you can do almost as well with one of the many sites that show you, step by step, how to exercise properly.  Two of my favorite are Livestrong and Mayo Clinic.

Get a support team!  Ask a few friends or find a group online.  Research has shown that those who have support do much better than those who go at it alone.

Set up your environments to support you.  Don’t buy foods that are bad for you. Stock your pantry and refrigerator with easily prepared and grabbed foods.  Read and learn about what’s important to your health and why.  Stay away from fast food places and avoid the neighborhood cupcake bakery. 😉  Find a walking or exercise buddy and commit to them.

And go straight to health!

For all the holiday cheer this time of year, I find that for many of my clients the holidays are particularly stressful.  It’s a combination of overly busy schedules, family obligations, financial strain from gift-giving requirements, and often a reaction to too much food, too much joviality, and the endless stream of holiday requests and marketing.

Over the years, a few time-worn strategies to dealing with it all have emerged.

Angela Spaxman, a Career and Executive Coach based in Hong Kong (and long time friend) talks about Mindfulness, and in particular about Mindfulness in the corporate world as the next big trend.  In her blog about the top benefits of mindfulness, she lists better listening ability, better moods, and in particular more control of your thinking as you are mindful of the negative thoughts that arise and take control of those thoughts by noticing them and replacing them with positive ones.

This is a perfect example of one way to control your memetic environment!

This morning someone sent me a video in memory of 9-11.  There it all was again. The planes hitting the towers.  The burning.  The chaos.  The faces.  All set to poignant music.  I’m sure for some, this was an appropriate way to remember, for me it was a smack in the face.

I don’t need to see this sad reminder of hate and devastation.  I knew people who died.  I am surrounded by communities that lost hundreds to this horror.  I’m no stranger to this tragedy.

I’m a bit astonished that we’re approaching the tenth anniversary of 9-11!  It’s not just that a decade has passed since that awful day, but it also marks ten years that I have not watched or listened to the news, with a few exceptions.

I was sitting at my desk that morning, when a friend called and said, “turn on the news, something has happened at the World Trade Center.”  As a result, I was watching it live as the second plane hit.  After remaining glued to the TV, for I’m not sure how long, I finally pulled myself away from it temporarily to drive the short distance to the beach where I, along to the dozens other who gathered there, watched the billowing smoke rise from the towers from afar.

For the next few days, like everyone else, I remained glued to the news whenever I was home.   I listened to speculation about what happened, watched the commentaries on how things were handled, and found myself anxious, angry and disturbed by the often conflicting information.

After a few days of this I knew I had to stop watching.  I turned off the TV, turned on some classical music, and within hours had reclaimed my equilibrium.  It was not that I was unaffected any longer, more that I had taken control of my memetic and emotional environment and chosen how I would respond.

I know someone will ask…but how do you get the news then?  How do you know what’s going on?  I see the news online of course — at sites of my choosing. I read the headlines and if I’m moved to learn more, I read the rest.  I am signed up to receive news alerts, and the husband or friends keep me abreast.  But I no longer fill my consciousness with the rapes, murders, house fires, war, starvation or the disease of the day.  I no longer listen to someone’s political agenda, spin on the news, or the continuing rhetoric and hyperbole.

In contrast, my mom has two TVs and a radio set to different news stations all day long.  She is constantly worried (and tries to tell me about it) about the economic conditions, the tainted food in some far off state, the latest pronouncement about what’s bad for you (often the exact opposite of what she heard last week.)  It causes her needless anxiety.  But she can’t stop herself, much as I try to get her to watch some mindless TV, or film, or the Food Network (my default station.)

She won’t control her memetic environment, but you can control yours.  Decide what information you will allow into your life.  It may surprise you what a difference it makes.